Amnesty International has commented on the recent report on torture and other human rights violations in Bahrain.  ¶ 3:57 PM 0 comments

This video is called U.S. ‘turned blind eye’ to torture of Afghan prisoners.

According to Dutch NOS TV:

Half of the soldiers think the mission in Afghanistan does not make sense.

This became apparent during a poll by TV program NOVA of 261 members of four military trade unions.

The chairman of the [officers] union NVO, ex commander of the Dutch army Couzy, thinks that this is worrying. "Top brass shout that this makes sense and that things are going well. However, if asked about it anonymously, most think it has no use", Couzy says.

This video from the USA is Fernando Botero, Artist in conversation with Robert Hass, Professor of English, UC Berkeley Poet Laureate of the United States (1995-1997); about Botero's work on Abu Ghraib.

British Army accused of “off the scale” abuses in southern Iraq

Horrifying allegations of torture and killings carried out by the British Army in southern Iraq emerged on January 31.

Based on witness statements, death certificates and video evidence, lawyers Phil Shiner and Martyn Day have claimed that 22 people were killed in British custody following an unequal firefight outside Majar al Kabir, about 100 miles northwest of Basra, on May 14, 2004. The lawyers allege that nine more people survived torture and abuse.

Problem at my Blogsome blog

My blog at Blogsome somehow is not working today. Though Blogsome itself seems to work allright. I hope the tragedy of my ModBlog blog, which disappeared forever without any warning, will not repeat itself.

UPDATE: my Blogsome blog is back; though some aspects still seem to be not working properly.

This video of this beautiful bird, the great egret, was posted here to find out whether Bird Cinema videos work on this Blogger blog. 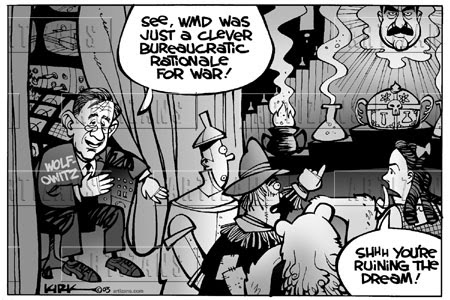 After Paul Wolfowitz' Iraq war and nepotism scandals, he now also has a family planning scandal on his hands.

WASHINGTON, Apr 12 (IPS) - Despite denials by World Bank President Paul Wolfowitz Thursday, newly disclosed internal documents indicate that the Bank may have in fact reversed a longstanding policy of promoting family planning on his watch.

The contradictions could further intensify Wolfowitz's troubles at the Bank, where he and his office had made statements denying his personal involvement in two unusually high pay raises given to his girlfriend and fellow Bank worker Shaha Riza.

After initially distancing himself from the decision, Wolfowitz made a humiliating apology on Thursday and admitted engineering the hike. His mea culpa failed to satisfy the 10,000-member Bank Staff Association, however, which has called for Wolfowitz's resignation.

The same day, when asked by U.S. National Public Radio at a press conference opening the spring meetings of the World Bank and its sister institution, the International Monetary Fund, whether the Bank has changed its policy on family planning, Wolfowitz denied there had been any changes.

"Absolutely not," he said. "I have seen rumours about that. Let me make it very clear. Our policy hasn't changed."

But according to an internal email made public by the Government Accountability Project, a Washington-based whistleblower protection organisation, Managing Director (MD) Juan José Daboub, an appointee of Wolfowitz and a man known for his conservative stance on family issues, had in fact instructed a team of Bank specialists to delete all references to family planning from the proposed Country Assistance Strategy (CAS) for the African nation of Madagascar.Wolfowitz' nepotist appointments of Iraq war backers at the World Bank: here.

The island of Pulau Upeh off the Malaysian State of Malacca has only one small sandy beach. But it happens to be one of the most important hawksbill nesting sites in the country.

Although the tiny island (seven-acres or 0.03km2 in size) is for the moment uninhabited, it is not entirely out of reach of turtle egg poachers. Nor has it fully escaped the rapid coastal development which threatens all that remains of turtle beaches in Malacca.

Malaysia, itself, was until recently one of only seven countries in the world where leatherback turtles landed in many numbers, but no more. Now the struggle is on to save the country's beautiful but critically endangered hawksbill (Eretmochelys imbricata), with its golden brown, exquisitely patterned shell, which still nests on the beaches of the Malacca Straits — the second most important nesting area in the country.

A troubadour for this generation
(Wednesday 10 August 2005)

INTERVIEW: DAVID ROVICS talks about the inspirations and ideas behind his progressive folk music.

At a time when grand humanitarian gestures have become indistinguishable from the latest corporate publicity drive, US singer-songwriter David Rovics is a rare and precious find.

Here we have a committed artist who encourages his audience not only to care deeply about the world but to go out and change it themselves - a true anti-capitalist and travelling troubadour for the G8 generation.

I meet Rovics at the Brighton [England] pub the Evening Star.

He enthuses about the performers that he appeared alongside at the previous day's Glastonwick Beer Festival, including Carter USM's JimBob, ex-Adverts front man TV Smith and "keep it spiky" trainspotters Eastfield.

Rovics's own music falls into the acoustic tradition of Woody Guthrie, Phil Ochs and Pete Seeger. ...

"My most recent song was directly inspired by the Bush administration.

They appointed Paul Wolfowitz to head the World Bank. That was so poetic, because, at least in the US, there's a real division between the global justice movement, around WTO, G8 and that kind of thing, and the anti-war movement.

"It seems outrageous because it is so obvious that these things are connected. How can you separate US economic policy from US military policy?

They're all part of the same thing.

"Appointing the guy who was in charge of bombing Iraq to the financial institution that's supposed to help develop the Third World?

If that doesn't make the connections between capitalism and imperialism obvious, then what will?"

US American intelligence service CIA in 1975 and in 1986 has stopped Dutch authorities from arresting Pakistani nuclear spy Khan.

US daily New York Times already wrote on this affair last year, based on anonymous sources. Now, Lubbers confirms this.

With this, in the 1990s he built the Pakistani nuclear bomb. He also sold his knowledge to Iran, North Korea, and Libya.

In 1975 there already was suspicion what Khan was doing, and Dutch authorities thought about arresting him.

According to Lubbers, however, the CIA wanted Khan to continue with his activities "in order to get more information" [the CIA and Pakistani military dictators being close pals; as Lubbers said during the interview; not included on NOS TV web article].

In the 1980s, Khan had to appear in court at last, but was freed due to legal errors.

Lubbers, then prime minister, wanted the court case to continue.

However, he did not carry on, on the "advice" of security services [CIA pals].

Dutch Attorney General Donner still last year denied that there had been meddling by secret services in the Khan affair.

They are making a documentary on the affair, as now it is sixty years ago that Japan was hit by two US nuclear bombs, on the cities of Hiroshima and Nagasaki.

"This seems like an extension of American security in the aftermath of 9-11," said John Strand, a Denmark-based technology consultant. "People will ask: `Do the Americans want to control the Internet?'"

My diary on peace and wars, arts, sciences, politics, the fight for economic and social justice, the environment, and more. Backup for http://dearkitty1.wordpress.com/