.comment-link {margin-left:.6em;}
Dear Kitty
Tuesday, May 03, 2005
Iraqi painter protests US Abu Ghraib torture I'll repost this, like most posts here, at my Dear Kitty ModBlog, with more links there; as soon as ModBlog downtime will be over. 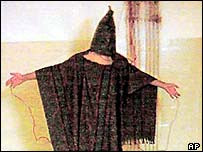 The subjects in each of Nasir Thamer's works are trapped behind bars, real or painted.

Since the Abu Ghraib prison scandal, the trauma of the occupation has seeped even into Iraq's artistic production.

"I used to paint scenes of traditional Iraqi life, Arab doors, mosques and letters from the Koran," says the 47-year-old artist. "This is a radical change for me but you just can't escape reality."

One of his paintings depicts an Iraqi child running away from a US Apache combat helicopter towards his mother.

The corner of the canvas where the woman was painted is ripped out, revealing black bars in the structure of the frame.

The style is that of Thamer's two favourite painters - Pablo Picasso and Salvador Dali - but the heavy symbolism he employs leaves no room for doubt over the message he wants to convey.

The Baghdad-born Sunni Muslim is almost apologetic about the crude metaphors of his latest works which deal with such themes as oppression, betrayal, looting, bereavement and captivity.

"I would've liked to have made an exhibit with more hope, but I felt it was my duty to do something on the suffering everybody is experiencing," says Thamer, one of the most respected Iraqi painters of his generation.