.comment-link {margin-left:.6em;}
Dear Kitty
Tuesday, May 17, 2005
Why did stegosaurs have plates and spikes? 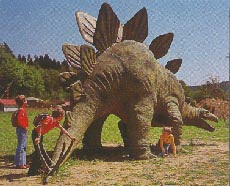 Stegosaur plates and spikes for looks only

The bizarre plates and spikes that lined the backbones of the long-extinct stegosaurs were probably extreme examples of the often elaborate and colorful displays developed by animals to recognize fellow members of their species, according to an international team of paleontologists.

The team's analysis of stegosaur plates lends support to a growing consensus among paleontologists that the weird adornments of many dinosaurs - the horns of triceratops, the helmet-like domes of the pachycephalosaurs, and the crests of the duck-billed hadrosaurs - likely served no function other than to differentiate species, akin to birds' colorful feather ornamentation.

"Our studies of bone histology are telling us a lot about dinosaur social behavior and lifestyle," said Kevin Padian, professor of integrative biology at the University of California, Berkeley, and a curator in the campus's Museum of Paleontology.