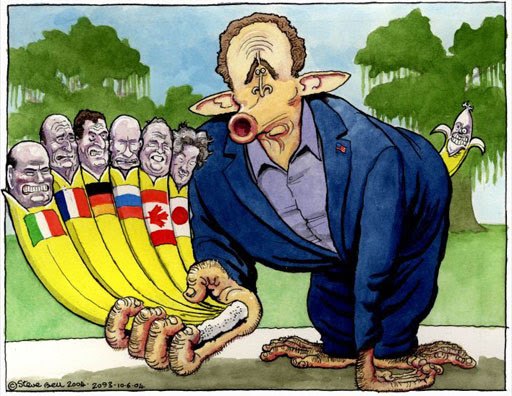 2-6 July in Scotland there will be the G8 conference of rich countries' politicians.

And many protests against their policies of making the rich richer and the poor poorer, and of war.

Their sudden decision to have some debt relief is definitely not a panacea.

There will also be the Live 8 concerts then.

Many blogs will report on all this.

And including Dear Kitty ModBlog, of course.

If there is downtime or other problems on ModBlog, then the blogging will be here on my backup blog.

MakePovertyHistory Radio: G8 Are You Listening?

On July 2, from OneWorld Radio website you can listen online to Make Poverty History Radio streaming live from the peaceful march in Edinburgh.

For one day only a special radio station will broadcast the MAKEPOVERTYHISTORY rally live to campaigners and Edinburgh city residents on 2 July - bringing them the latest news from The Meadows in Edinburgh, where tens of thousands of people will gather calling for trade justice, more and better aid and debt relief for the world's poorest countries.

Broadcasting on 87.7FM - MAKEPOVERTYHISTORY radio will be on the air for twelve hours -- 08.00 - 20.00, packed full of content from the huge range of events on the day, interviews with speakers, event information, debates on the G8 and the campaigns key aims and live links as the huge human white band forms around central Edinburgh.

Throughout the day, a team of reporters, including community radio journalists from Africa, will be in the crowds in The Meadows bringing updates from the different entertainment and action zones as well as a selection of music and speeches from the main stages.

Produced in partnership with the Community Media Association and Edinburgh Telford College community radio station, ETC FM, who kindly offered over their frequency for the day, the station will also be available online at the Make Poverty History website.

MAKEPOVERTYHISTORY radio will be distributed to number of community radio stations in the UK, Africa and Latin America through the AMARC (World Association of Community Radio Broadcasters) network ( www.amarc.org ).

Project manager Bill Best from Community Media Association said: "This is a fantastic way for all campaigners to keep abreast of what is going on - whether they have made it to Edinburgh in person, or are listening in around the world.

The content will be a mix of the serious and the fun - we want to bring a flavour of the rally atmosphere to the airwaves, and ensure the key messages of Make Poverty History are heard by everybody tuning in."

Glen Tarman from MAKEPOVERTYHISTORY said: "The 2nd of July in Edinburgh will be the day when the people of Britain add their voices to those from Africa, Asia and Latin America to send a loud and clear message to the G8 that now is the time to make poverty history.

Make Poverty History Radio is part of connecting people both in Edinburgh and around the globe as the world calls for justice."

Action against Faslane nuclear military base, on 4 July, see here.